In the winery located in Gallo, a hamlet of Alba, Mauro Sebaste pursues his project with the same philosophy of his mother Sylla, one of the first women in the wine business. His wines have originated from the meticulous research of the vineyards, chosen for their soil characteristics and for their favourable aspect. The vineyards, which extend for about 30 hectares, are located in the municipalities of: Alba, Serralunga, Barolo, La Morra, Verduno, Vinchio, Diano d’Alba, Montelupo, Mango, Piobesi d’Alba and Vezza d’Alba.

I contacted Mauro Sebaste before Vinitaly, and we agreed on a tasting of 4 different vintages of Barolo Riserva “Ghè”: 2016, 2015, 2012 e 2011. The tasting took place as agreed at the fair and I am going to tell you everything about it.

Mauro personally manages the vineyard, from the checking of the soil characteristics to the grape thinning, ensuring that each single plant will be able to take each bunch to the desired ripeness. The “Ghè” vineyard, entirely owned by the winery, is located on the Cerretta hill, in the municipality of Serralunga d’Alba at an altitude of 380 metres. The soil consists of limestone and sand with portions of clay and iron. The Nebbiolo clone used is the Michet.

After strict control of the ripening, the hand-harvesting takes place in October with rigid grape selection; then the grapes are put in perforated crates with a maximum weight of 25kg. The winery is equipped with all the necessary technology, and after further hand sorting on a vibrating belt, the vinification starts with soft pressing of the grapes.

The must ferments in temperature controlled stainless steel tanks, with daily pumping over; the juice is then kept in contact with the skins for 12-16 days. After the malolactic fermentation, the wine matures in 400-litre French oak barrels for about 30 months. The wine then stays in the bottle for at least 24/30 months, and finally, after 5 years, it is released on the market, so that it can be labelled Riserva. About 1,000 bottles of this wine are produced every year, except for the 2016 vintage, which I am going to explain about shortly.

Let us move on to the wine tasting.

The 2016 vintage had a very long vegetative cycle. There had been an early winter, with mild temperatures, followed by an abundance of precipitation, which helped with the establishment of important water reserve for the plants. The later cold weather conditions then caused a vegetative and phenological delay which lasted until the end of the summer. The mid-October harvesting gave an excellent grape quality, both from a technological and phenological point of view. Unlike the other vintages, for the 2016 vintage, due to an increased grape production, an extra barrique was used in addition to two casks, resulting in a larger number of bottles produced.

The wine has an intense garnet colour with ruby glows. On the nose it has pronounced rose and violet hints that gradually leave room for fruity black cherry and red cherry aromas, which are well defined. The wine then changes in the glass, opening up tones of sweet spices, such as vanilla – due to the use of the barrique – then hints of licorice, forest floor and mushroom. In the mouth the wine is full, with a beautiful acidity in evidence and high but silky tannins. The wine is very elegant, still very young, and has a long finish with evidence of a balsamic aftertaste .

The abundant winter snowfalls have allowed an excellent water supply for the soil. This situation, followed by a mild spring, has favoured an early vegetative cycle that has then been maintained during the rest of the year. The summer heat was above average, however, thanks to the retained water reserves, it did not cause any particular water stress problems. The vintage can be defined as typical with excellent healthy grapes.The Nebbiolo ripened perfectly.

The wine has a shiny garnet colour, with ruby reflections; it is very similar to the previous sample. On the nose we immediately sense plumand cherry hints, followed by black tea, mineral and forest floor notes, with a balsamic finish . A full bodied wine where the Serralunga tannins and great acidity makes it seem younger than the first sample tasted. The wine still has a long finish of balsamic tones.

The low winter temperatures lasted until the end of February, with heavy snowfall. On the one hand it helped to create a good water reserve for the vines, but on the other hand, it generated a delayed vegetative recovery compared to the average year. The spring was particular wet, and combined with the effects of cold winter, led to a poor fruit set. The Nebbiolo harvesting took place in October, after a hot summer and great autumn temperature variations.

The wine has a compact garnet colour. On the nose there are hints of red fruit jam, cherries in spirit, followed by pepper, cloves, orange peel, cocoa and tobacco. In the mouth the wine is powerful, it shows its youth with a vibrant acidity and tannins that begin to be just smooth. The finish is long with a licorice aftertaste.

The 2011 vintage was out of the ordinary; the ripeness of the grapes was very early and the yield was not particularly high. The winter was regular, both in terms of temperatures and precipitation. April was hot, and in particular, the summer temperatures had high variation. For the Nebbiolo grape the September rain was favourable, and allowed a balanced ripeness, both technological and phenological. From a grape health point of view, itwas a very good vintage.

In the glass the wine is bright garnet in colour. On the nose there are complex hints of cherry and raspberry jam, followed by dried violet, roasted coffee beans, licorice root and truffle. In the mouth, the wine is full bodied, with a vivid freshness and noticeable tannins. The finish is long, again with notes of licorice.

A beautiful vertical of a valuable Barolo; it has been an experience that I would like to do again in a few years. Now we can better understand what is the “Ghè” interpretation by Mauro Sebaste. 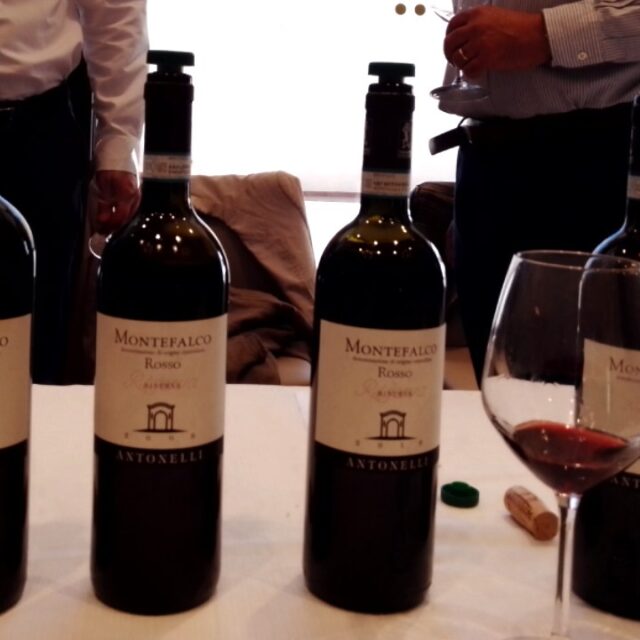 Vertical of Montefalco Rosso Riserva di Antonelli, the other Montefalco

Le Strette: Wines with Character in the Heart of Langhe

Maso Grener: Chardonnay from the mountains